Per my usual form, I post after four months of nothing.

So much has happened! I'll try to update this later with all the goings on of my life, but mainly I wanted to make this post about the Texas wildfires spreading throughout the state.

They've been burning for a few days now and cannot be contained because Texas ran out of air support. Our governor Rick Perry decided to decrease the firefighting portion of the budget by 75% (despite it being the hottest and dryest summer we've had in awhile), and now we don't have enough firefighters or resources. (And just FYI, this douchebag is running for President..) When I leave my apartment complex, I can see the smoke from every direction I look and you can smell the burning. Many neighborhoods have burned down, many people have been evacuated and have lost everything they own. It's a really scary and sad time right now. I'm packing a bag in case I need to bug out too, which I'm hoping doesn't happen because I have my cats. (Also I'd like not all my stuff to burn up..)

If you can help in any way, donate money to the Capital Area Food Bank or Red Cross of Central Texas. Material donations can be sent to me if you're interested and I can take them to any of the drop-off locations.
Here are lists of what is needed:
http://www.kvue.com/news/Austin-area-wildfire-donations-129263013.html

I am largely safe, I believe. There are two big fires that are north of me, but they aren't spreading a whole lot, thankfully. There are roads that aren't THAT far away from me that are being closed down and there aren't a whole lot of entrances and exits into my area as I live kinda out in the middle of nowhere.. There is one fire in Bastrop (east of Austin) that is now 6 miles wide and 16 miles long because it is 0% contained. And because of our terrible drought, everything is very dry and conditions are perfect for spreading wildfires.

Here's a good interactive map that is getting regularly updated with all the active fires:
http://ticc.tamu.edu/Response/FireActivity/
You can click on each flame and get information about that particular wildfire.

This is also a good resource about what's going on:
http://texashelp.tamu.edu/004-natural/fires.php

The Texas Forest Service is putting out an updated daily fire danger map every day. Here was yesterdays:

Today is looking much better, thankfully..


Here are a couple pictures of the smoke and fire in various parts of Texas... 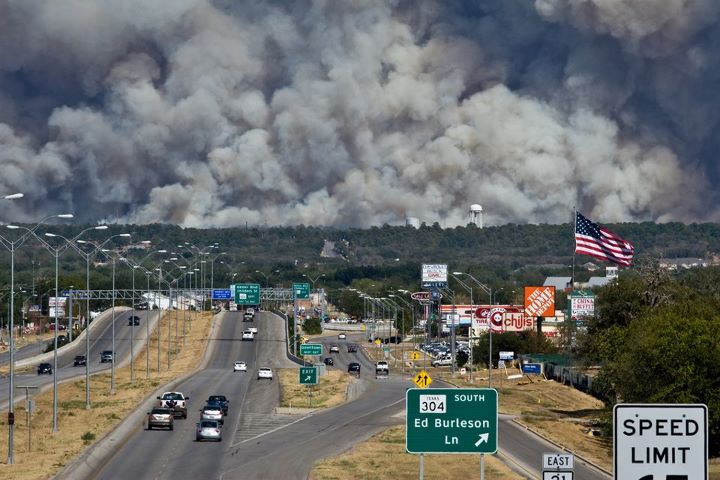 This is in Willis, Texas- north of Houston.

This is an especially scary image, I think. This picture was taken from the 360 bridge area in West Austin. That city to the left is downtown Austin. That is what you can see from the city I live in. Frightening.

A close up view of the fire that's causing the smoke in the last picture.


Please send good thoughts/prayers/good qi/whatever you want to all those here in Texas. Many have lost their homes and everything they own. Right now everyone is thinking about containing the fires and putting them out. But soon after, we'll have to deal with the massive devastation. :o(
Collapse